A Way to Foster Productive Struggle?

My school has been trying to better create conditions for productive struggle in our classes, because a lot of students have taken a very receiving stance. So early in our Area and Volume unit, I decided to use this task from Illustrative Mathematics.

The task is a 7th grade task, and so involved nothing new for my high school geometry students – just area and perimeter/circumference. But the task has a lot of parts, not all of which are obvious from looking at it. So I gave them task, and then I was “less helpful.” In fact, I barely spoke during the lesson, only quietly clarifying things, but reflecting their proximity questions back towards themselves and their other group members.

Almost every group that attempted the task solved the problem on their own. (I followed up with an extension where they designed their own stained class on the coordinate plane and found the price using the same pricing, for those who finished quickly.) I had a group of three girls who don’t usually feel very confident in my class feel like rock stars after figuring the whole thing out themselves.

I thought it really applied here. While the content was still related to what we were learning in high school geometry, the opportunity to solve a complex task with little scaffolding was really helped by using a task from an earlier grade. I recommend it.

I had a pretty good lesson recently that I wanted to share. It was at the end of my quadrilaterals unit, and so we were working on coordinate proofs. I love coordinate proofs because you can get so much information from just a pair of coordinates, which lends itself to lots of different ways of solving the same problem. Add to that how many different ways there are to prove something is a square, and we have the start of something good.

I gave the students the above sheet, starting off with some noticing/wondering about the graphed figure. Then I assigned each table a different method to prove that the quadrilateral is a square. Each group was off to their whiteboards to get started.

It was really great to see each group discussing the problem so intently, and it reminded me how easy it is to facilitate discussion when up at the vertical whiteboards. Afterwards, the students went around in a gallery walk to compare their proofs to the other methods. They analyzed how they were similar, how they were different, and thought about which method they might prefer in the future. (Some comments included things like preferring method 2 because it only involved slopes, even though it involves more lines.) 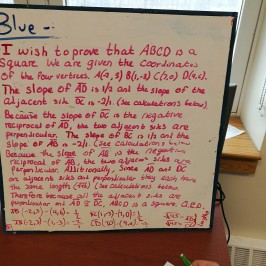 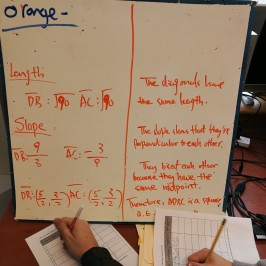 The whole lesson went so smoothly and had tons of intra- and inter-group discussion. Need to use the structure again.